The Florida Motorcycle Trip - come on along for the ride... 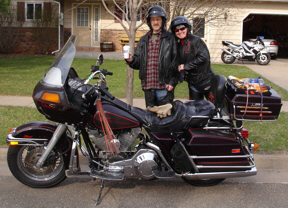 We took I-94 out of town.  Went through Lake Delton in Wisconsin.  Saw a lot of wild turkeys and cranes.  Stayed on the interstate through Rockford Illinois.  By 4:00 in the afternoon we were in The Bloomington-Normal area. We stayed on the road till about 6:15 then we found a Super 8 (this name kinda cracks me up - the definition of "suppurate" is "To form or discharge pus." - Yeccchhh!)  motel in Crawfordsville.  We've had good luck with Super 8 motels in general.

When we got to Indiana, the speed limit was 70 miles per hour. By the time we got to Crawfordsville, the odometer said 94250 miles, so it was a 497 mile day.  We got some groceries at Krogers and brought them back to the motel.

Had a good day of riding, finally out of familiar territory.  I was surprised how hilly and scenic the southern part of Indiana is. We took highway 135 which is a beautiful twisting rural road.  Spent most of it in 2nd & 3rd gear.  The trees are just starting to bud, noticeably ahead of our trees back in Wisconsin.

Had a good burger at Tumbleweeds in Salem. Our waiter was itching to get out on his bike, too. By about 2:30we were driving towards the nice skyline of Louisville.

Zipping around the city, we passed a stadium with a lot of people watching a baseball game.  Trying to make some time, we pressed on to London, Kentucky.  By now, the freeway scenery was getting better and better.  The roadway had passes that cut through the rocks along the way.

We stayed at a real nice Hampton Inn up on a hill near Lake City. When we went into town to get some groceries, there was a little scene going on in the parking lot with a cop and a woman and a small crowd of by-standers.  By the time we came out of the grocery store, there was a large crowd of by-standers.  It looked like the nightly entertainment.

On the way back to the motel, we passed a narrow gully that had a bricked-in railroad tunnel for a very old, very small gauge of railroad. It was too dark for photos.  The motel had an awesome collection of old photographs and memorabilia lining the hallways.  Moonshining is the proud tradition around here! 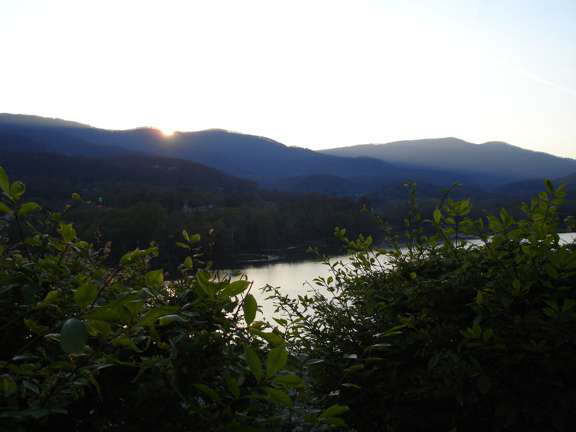 There were llamas behind the motel.  There was one aloof male in the group, and the rest were females.. In the morning morning we talked to the guy that was tending them.  He said the male had bred all the females, but so far no luck.  He thought the male might be shooting blanks. 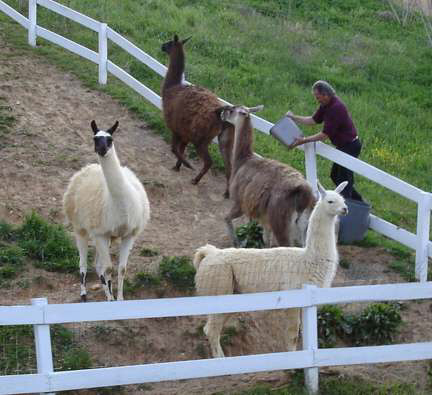 Got gas in south Knoxville.  Took the beautiful highway 60 which was another one of those winding roads where you go about thirty miles per hour.  Went through Gainesville and Eatontown, Georgia.  We stayed on I-75 through Macon, Cordele, and Tifton. As the sun set, the road was starting to get bad with a lot of construction and rough pavement.  We stopped for some weird gas in Sunsweet.  I only put in a gallon because it smelled funny.  Getting tired, we ended up at a Budget Inn on I-75 north of Valdosta.  It was after dark by then.  There was a truck graveyard behind the motel and I smoked a cigar out there in the moonlight listening to the roar of the highway.

We traveled about 465 miles today.

The day started out beautifully again.  Live crabs, orange groves, palm trees and pelicans.  We are definitely not in Wisconsin anymore!  There actually is a Swanee River, just like the old song.  There were a lot of traffic lights going thru Orlando.  We had been to Orlando for Disneyland when the kids were little, and that was the best, so we just got through as fast as we could. We got on hiway 441 in Holopaw, had a good time talking to some other motorcyclists at a snack break, then got on hiway 27 at Belle Glade.

We narrowly avoided getting trapped in a traffic jam on the tollway near the Miami airport. 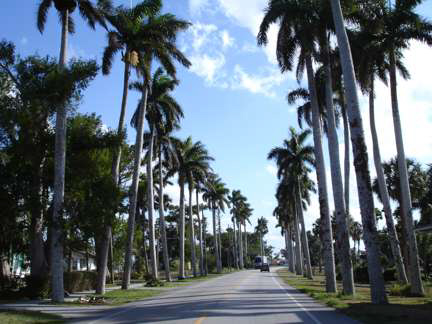 Old buildings baked in the sun, and there were colorful displays to attract the tourists (us). 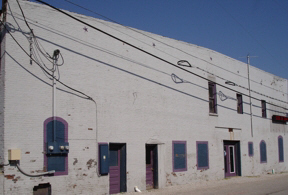 The afternoon was one of those surreal rides where time seemed to stand still.  This is a flat land with flat horizons in all directions, and the mangrove swamps seem to go on forever.  There are a lot of birds to look at, and it was all new scenery to me.  There are isolated towns in the mangroves, like Homestead, where everybody seemed to be hanging out on the street all day.  There are a lot of nice marine sculptures all over Florida, just like we have giant cows, deer, chickens, bears, and mice holding a piece of cheese in their front paws. 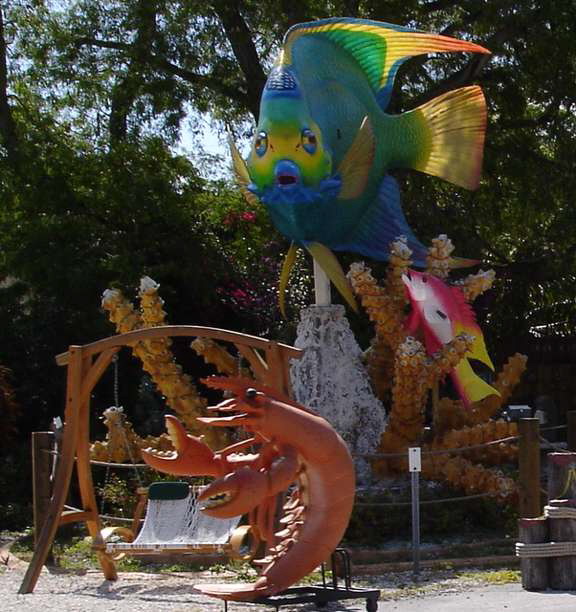 Julie snapped a nice shot from the bike as we rumbled through a tunnel in Florida. 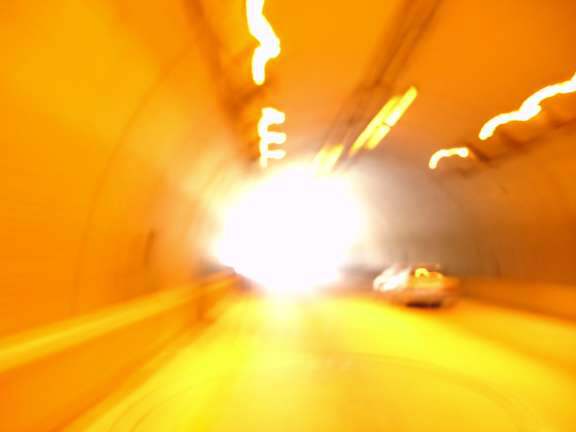 And also the more mundane sights, common everywhere in the world, I imagine.  Where the hell was I last night?

Some nice paintings on an underpass... 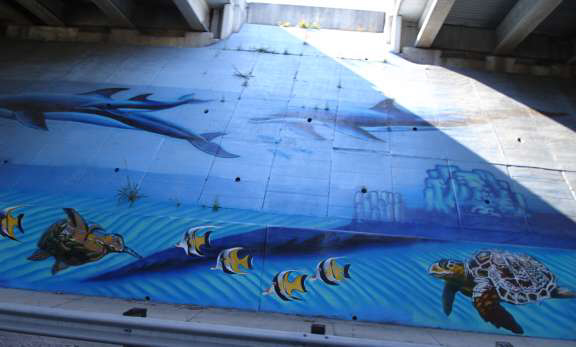 And finally, we made it to Key Largo!  The sun was going down, and it was going to be dark soon.  It was time to stop for a beer and some sea food.

We covered about 523 miles today.  It took us four days and 1992 miles to get from Eau Claire Wisconsin to Key Largo Florida.  We had a motel reservation so we checked in for the night.  We were both pretty buzzed and excited to be in such a different climate and see so many new places.  The bike has been running great, the roads have been good, and weather has been nice, so we don't feel beat too down.  We can't wait to check the place out in the daytime!