Julie sure is a good sport.  I can't believe she's willing to head out west with me again on the Harley.  This time, we'll go from Wisconsin to Iowa as we detour through Nebraska on the way out to Sturgis.  We can watch our youngest daughter playing in a softball tournament in Omaha.  Then hopefully we can hook up with Noah & Bert in Sturgis.  After Sturgis, instead of heading home, we'll keep heading west to Jackson, Wyoming where our son has been working all summer.  Our two daughters and a friend from up the street will meet us at the Jackson Hole airport.  I was really looking forward to the trip.

We left Eau Claire at 8:30 in the morning with the '87 Harley FLTC showing 57591 miles on the odometer.  Headed south on highway 93 which has some beautiful views of farms on the high rolling hills only half an hour from home.

Chased by rain, we stopped at 74 miles in LaCrosse where the rain caught up to us as we stopped for a break at McDonalds.  Pulled in to Prarie Du Chien at noon and stopped for gas.  The weather was clearing up.  I always like the land along the Mississippi river.

Took hiway 13 south into Iowa to the town of Strawberry Point.  The roads through Iowa had some shallow rolling hills and nice farmland.  We stopped to look at a map in Parkersburg and a couple of the town's motorcyclists thought we were lost and offered assistance.  They joked about being lost in Parkersburg, since you could see the whole two-block town from where we were sitting.  By about 3:15 we were in Grundy Center, Iowa.   We took hiway 13 to hiway 3, then detoured on 14S.  By now the weather was hot and clear.  I got lost going into Des Moines and accidentally found a great shortcut around the road construction in town.  We stopped to eat at Perkins in DesMoines, then headed off into the sunset. Stopped for gas in Adel.  We were riding on hiway 44W as it got dark.  There was a sliver of moon and the fireflys were out in full force.  The streak of light went around us at night like the warp-speed stars in science fiction movies.  We came into Omaha on hiway 80W.  Omaha is a big city with busy roads, so I was glad to get to the motel around 10:00 pm.  I was beat and the bike was filthy from the morning rain.  It was a good day riding and Julie was cheerful because she was looking forward to watching softball for a couple of days and just hanging out with the team.

I got up early and used Julie's helmet for a ride to Nebraska Motorcycle Supply to buy myself a helmet.  It was a friendly place and I bought a cheap helmet that I would use for the rest of the trip.  We watched the girl's softball games and buzzed around town for two days.  Went to check out a huge new Harley dealership but it wasn't open yet. They had a bunch of police-model Harleys in the parking lot.  The weather stayed hot and sunny.  Omaha is kind of spread out with a lot of low, flat buildings.  The traffic didn't seem to be in much of a hurry.

Headed west out of Omaha.;  First stop was in Wahoo where I took a picture of Julie in front of a huge cow.  The farmers had cut off the tops of every five rows of corn, leaving the sixth row standing.  There was a shorter, sweet-smelling plant that may have been sorghum.  We ate breakfast at the Wigwam.  It had a lot of old west historical items like Indian art and old woodwork.

Stopped in Grand Island.  As we headed west toward Broken Bow, the corn started giving way to grassland.  The weather was clear and dry as we stopped in Mullen and then in Alliance.  By evening the wind was picking up and the windmills were turning fast.  We saw very few bikes, but a lot of horse trailers and east bound coal trains.  The coal trains each had hundreds of cars, and we would see one of these trains about every ten minutes.  We rolled into Scottsbluff around 8:30.  The Nebraska town is located in flatlands with a trace of the Badlands influence. A big bluff gives the town it's name.

Stop for gas in Harrison.  Then pull in to Agate Fossil Beds park.  There were snakes in holes along the sidewalk to the visitor center.  The center had some cool skeletons of animals they found around the area, like some kind of a camel!  There were also some long (3 or 4 feet) spiral fossils that were formed in prehistoric giant prarie dog tunnels.

Finally leaving Nebraska, I had to take a picture of the "Nebraska Pine Ridge Area".  I guess there are a couple of small trees in some guy's front yard in the far left of the picture. Hah!

.Crossing into South Dakota the scenery just keeps getting better.  Custer National Park is full of animals like this goat that walked into the road and almost got pasted by a maniac on a Gold Wing.

We drove around the Black Hills for a while.  Some of these places didn't look like places you should drive into on a Harley.  But we did anyway.

There are a number of small lakes scattered around the Black Hills.  One of these times I would like to camp at a place like this. 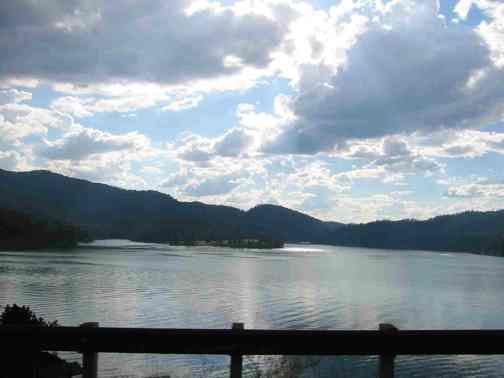 After doing way too much bagger motocrossing around the hillside, I finally located Noah's "Tour Pak"...

...in the Elk View campground near a tent flying a Best Western flag.  Julie and I set up camp nearby and got some dinner.  Although firewood was stacked everywhere, there were no fires allowed due to the dry conditions.  Bert & Noah weren't back at the campground yet, so Julie and I went into town to look for a liquor store.  Cops were hauling away bikes from "no parking" zones.  We just grabbed some wine and chips and walked around for a little bit enjoying the sights & sounds.

We went back to camp and dozed off listening to the roar of the bikes on the highway.